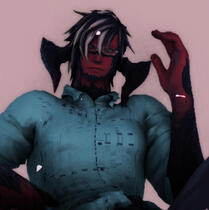 Born in the steppes, and lost his parents at a young age, he was found by a traveling Bard that was passing through the steppes, he adopted the young boy, and raised him, teaching him all he knew about music, they found out he had a talent for music and as he grew older , the bard taught him more and more complicated and songs, and Vhunter showed he could learn anything just by seeing it once. From the time he brought in he was taught basic things as well to care of himself. When he was old enough to leave, he started to learn other jobs and picked up Crafting jobs to earn money as he travelled around. By the time he was 26 he had earned enough for a house of his own, so he had place to go to when he was tired of traveling playing music. By the time he was 27 seemed to have more free time and he found he had the desire to dance, and started dancing at the Club Resurrection. He seemed to enjoy dancing on stage , meeting new people and talking to patrons that come in. He would go clubs late at night after playing music for people in New Gridania. He would mingle with girls he would meet at the clubs. He would fall in love with some from time to time, and his heart broken just as much as he fell in love. He would then start working at The Honey Comb and Moonlit Kiss to get more experience. After learning what he needed from Club Resurrection he would quit. Later on he would make more friends and tried to be more social to get his mind off of women, and just have fun with his friends. Occasionally he would go out to dance alone or with friends and meet new people and flirt again when he felt ready to.